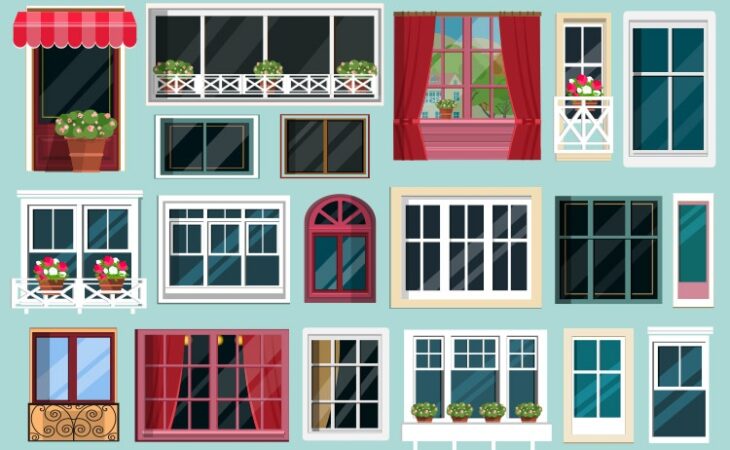 It is not easy to understand why the French window is so misunderstood. French windows are technically not French. You can walk through French windows like doors, but they are still classified as windows.

French doors are very similar to standard patio doors, so they are sometimes called French Doors by estate agents.

French windows are not French, as the name implies. French windows have a history that begins in Italy. If we look back further in history, French window design was first utilized by the Romans and Greeks.

The Renaissance saw the revival of the design principles of symmetry, proportion, and geometry, and the architects took inspiration from traditional Greek features such as columns, arches, and lintels. This trend can be seen in French window design.

Scroll down for some French Window Design Ideas for Your Home.

These windows can be tilted open from the top or swing inward from the sides.

Tilt-only or hopper French windows are tiltable inward from the top to allow constant outside airflow.

These stationary windows can be used to let light into the home.

Arched French window design can soften the appearance of the room and make is look more open.  You can get a wider view of the outside with an arch. The arch windows are also known as radius windows because of the arch shape on top.

French windows made from aluminium can last for decades due to its resistance to impact and outside weather. Aluminium French windows are strong and lightweight, so they are hard to dent.

French windows are called portes-fenetres in France for ‘windowed doors’ or ‘door-sized windows.’ They function in the same way as French doors. Both casement sashes and a primary leaf are used to open them.

True French windows are narrower than other doors and have elegant proportions.

French windows look similar to standard casement windows. They are attached to the frame by hinges on one side, but they do not have a central post nor mullion. They create one large opening without any structural elements that block the view.

You can attach a handle to each one and fit them with an espagnolette locking mechanism, and French windows are very safe.

French windows have the same locking mechanisms as standard windows. This makes them equally secure and safe. These windows pose the greatest risk if they aren’t properly installed.

How to Install French Windows

French windows can be difficult to install. Professional help is essential to ensure a successful installation. An expert with experience in installing French windows will ensure that the French window opens and closes smoothly. You won’t be affected by air leaks or other problems if the gaps around your door frame have been sealed. It can affect your home’s security and energy efficiency if your French window isn’t installed correctly.

Cost of Installing a French Window

French windows are about the same price as regular casement windows. French windows cost about $120 to install. Labor costs range between $150 and $270 for each window. However, the exact price will vary depending on where you live.

Scroll down for some more French Window Design Ideas for Your Home.

French Window Designs for your Home

Modern Window Grill Design Details and Photos for Outside 2021 on August 23, 2021

15 Modern Window Grill Design Details and Photos for Outside

8 reasons why you should hire a property dealer

Ready to Move 3 BHK Luxury Flats for Sale in Zirakpur

10 Things You Need to Know Before Buying a Flat

FLATS FOR SALE IN ZIRAKPUR